Blas Payri, a Spanish professor of sound design, film sound analysis and film music in postproduction, mentors a filmmaking workshop and screens his latest short movie at the fourth edition of CDIFF.

Blas Payri is a professor at the Universitat Politècnica de València (Spain) of sound design, film sound analysis and film music in postproduction. He works in soundscape, electroacoustic music and screen-dance. At the 2019 edition of CDIFF, Dr. Payri will participate in different sections of the Festival’s program such as mentoring a filmmaking workshop and presenting the screening of his latest work, Mareta – Please Yes: a lullaby.

Filming Strategies in Contact Dance: The interaction between camera and body movements will look at examples of different dance films and offer practical applications of dance filmmaking techniques. Participants need to bring a camera. 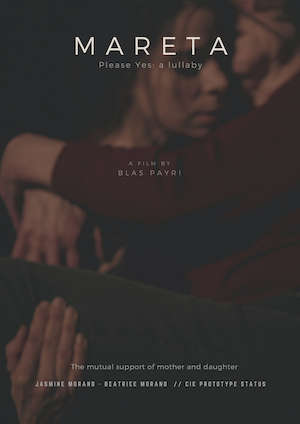 Film screening: Blas Payri presents his short film Mareta – Please Yes: a lullaby. This piece revolves around the support from mother to daughter and daughter to mother, with the participation of real mother and daughter Béatrice and Jasmine Morand. The camera dances with the characters to reveal the moments of contact and mutual support, the separation and reuniting and the evolution in time of the relation. The soundtrack has been created using a Valencian traditional lullaby, ‘Mareta’ (‘Little mother’) that sets the rhythm and pulse of the piece and the editing. Blas Payri is the filmmaker of this piece.

The Contact Dance International Film Festival celebrates films featuring momentum-based dance created by some of the top creators and dancers in the field of contact dance improvisation. It provides a unique opportunity for both film and dance lovers to experience the joy, chaos and intimacy of human connection through physical movement. The Festival runs every two years on the odd years and presents its fourth season from June 29 to July 1, 2019.

Contact dance improvisation is a social dance involving touch, in which momentum between two or more people is used to create and inspire dance movements. The form is similar to martial arts practices such as Aikido that use momentum and rolling point of contact in defensive moves.