Spain’s “The Bride,” based on the tragedy novel “Bodas de sangre” by Federico García Lorca, will be featured at this year’s FIL.

The International Literature Festival (FIL) is an annual, multi-disciplinary, national and international French-language literary festival whose mission is to promote literature, books and reading to various audiences.

Presented by Lisez l’Europe, a group of cultural institutions whose mission is to present a contemporary perspective of European literature in Montreal, this series of films offers adaptations of contemporary novels to the big screen. 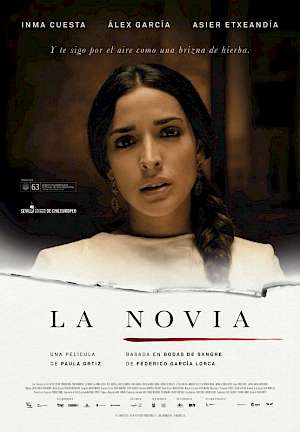 The Bride the story of a love triangle between two men and a woman. Two lovers carried away by their passion defying all moral and social rules even challenging their own judgment. The same day of her wedding, the bride and her lover escape on horseback to live their love. Their disobedience will have devastating consequences. The book was written in 1932 and first performed at Teatro Beatriz in Madrid in March 1933. La Novia dominated the race to the 2016 Goya Awards –Spain’s equivalent to the Oscars®– with a total of 12 nominations, including Best Picture.