The Spanish documentary “Segunda Vez” (“Second Time Around”) directed by Dora García will be screened at the 2018 edition of the Montreal International Documentary Festival. 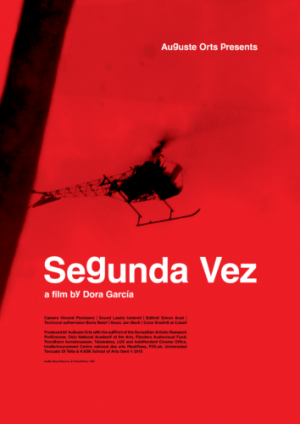 The Grand Prix winner at FIDMarseille Festival, Segunda Vez (Second Time Around) defies categorization, sitting somewhere between documentary, fiction and performance. At the heart of the project is Oscar Masotta, an icon of the pre-dictatorship Argentinian avant-garde, known for his happenings and his interest in Lacanian philosophy. Instead of making a straightforward biography, Dora García takes an unconventional approach that aims to situate Masotta’s ideas in present-day Argentina. Recreated happenings, discussions among ordinary people invited without explanation into a mysterious waiting room, the transportation of a bag (a body?) into a forest… Gradually, the entire country is saturated –again– in a very real feeling of unease and paranoia.

The documentary is part of a more complex artwork. Second Time Around centers on the artist Dora García, embarking on an open journey around a broad array of her works in diverse formats and mediums —film, performance, texts, drawings— and punctuating some of the constants running through her career. It outlines the complex network of intellectual reference points —from literature to more marginal or heterodox frames of reference– her artistic practice draws from as it circulates fiction, performance and what García refers to as the “illusion of the human psyche” produced by everything.

The title, Second Time Around, originates from Julio Cortázar’s homonymous story, written in 1974, which recounts the climate of psychosis and uncertainty caused by the trauma of disappearances in Argentina.

Dora García (born in 1965) is a contemporary Spanish artist. She draws on interactivity and performance in her work, using the exhibition space as a platform to investigate the relationship between artwork, audience, and place. She transforms spaces into a sensory experiences by altering perception and creating situations of interaction, often using intermediaries (professional actors, amateurs, or people she meets by chance) to enhance critical thinking. By engaging with the binary of reality vs. fiction, visitors become implicated as protagonists either in the construction of a collective fiction or questioning of empirical constructions–sometimes knowingly, and sometimes not. Since 1999 she has created several artworks on the web.

She was described as one of the most important artists of her generation by the director of the Reina Sofía Museum (Madrid), Manuel Borja-Villel.

The Montreal International Documentary Festival (RIDM) returns for its 21st annual edition, from November 8 to 18, 2018. With 157 films from 47 countries and an extensive program of discussions and free activities, RIDM remains committed to its mission of democratizing and promoting auteur documentary cinema.

The Festival presents 25 world premieres, 17 North American premieres, 30 Canadian premieres and 51 Quebec premieres. With 71 films from Quebec and the rest of Canada, RIDM stands out as an essential event for local artists. The Festival is also reaffirming its goal of promoting works by women, with 81 women filmmakers (along with 77 men) in this year’s selection. 11 awards will be presented to the makers of the best films at RIDM 2018.