Pilar Fatás, director of Altamira National Museum and Research Center in Cantabria (Spain), participates in the first event of EUNIC Montreal: a conference part of the “Year of European Heritage.”

On the occasion of 2018 as “Year of European Heritage”, this conference is the first project of the EUNIC group in Montreal, allowing participation in the global celebration of European cultural heritage, and creating new professional contacts in the field of archeology and museology among the high-profile institutions on both sides of the Atlantic.

Pilar Fatás has been directing Cantabria’s Altamira National Museum and Research Center since 2016, where she was previously vice-director for 15 years. Trained in Management of Cultural Heritage, History of Art and Sciences of Antiquity at the University of Zaragoza, and in Anthropology at the National University of Distance Education, this specialist from the Conservators’ Corps of State Museums currently investigates the relationship of rock art, in general, and that of Altamira, in particular, with contemporary art.

About the Altamira Museum

The Altamira Museum is a research center studying prehistory and the first art of humanity. The Museum’s objectives are also the transmission of this knowledge to society, the value of the cultural heritage it manages and the social awareness of its necessary protection. Its mission is to manage the cultural heritage it has entrusted, the cave of Altamira and its cave art specifically, conserving it and making it accessible in an adequate way to the citizens. For this, it must generate its scientific knowledge and that of its context, Prehistory and Art, and disseminate it, facilitating intellectual access to its values ​​and its enjoyment.

EUNIC Global is the network of the international cultural relations institutes from the member states of the European Union. Formed in 2006, it has 27 members from 23 countries. EUNIC’s members work in over 150 countries with over 2,000 branches. They work in the arts, languages, youth, education, science, intercultural dialogue and development sectors, with an international reputation as Europe’s leading cultural relations practitioners.

About the Pointe-à-Callière Museum

Designated as a national archaeological and historic site, Pointe-à-Callière presents centuries of history from the settlements of Indigenous People to the present day. Located on a spot occupied by humans for more than a thousand years and on the very site where Montreal was founded, the Museum is home to some remarkable architectural ruins that are showcased on site. The Museum’s mission is to bring visitors to know and appreciate the Montreal of yesterday and today through outreach, education, conservation and research activities revolving around Montreal’s archaeological and historical heritage, and to build links with regional, national and international networks in these fields, for the benefit of visitors. 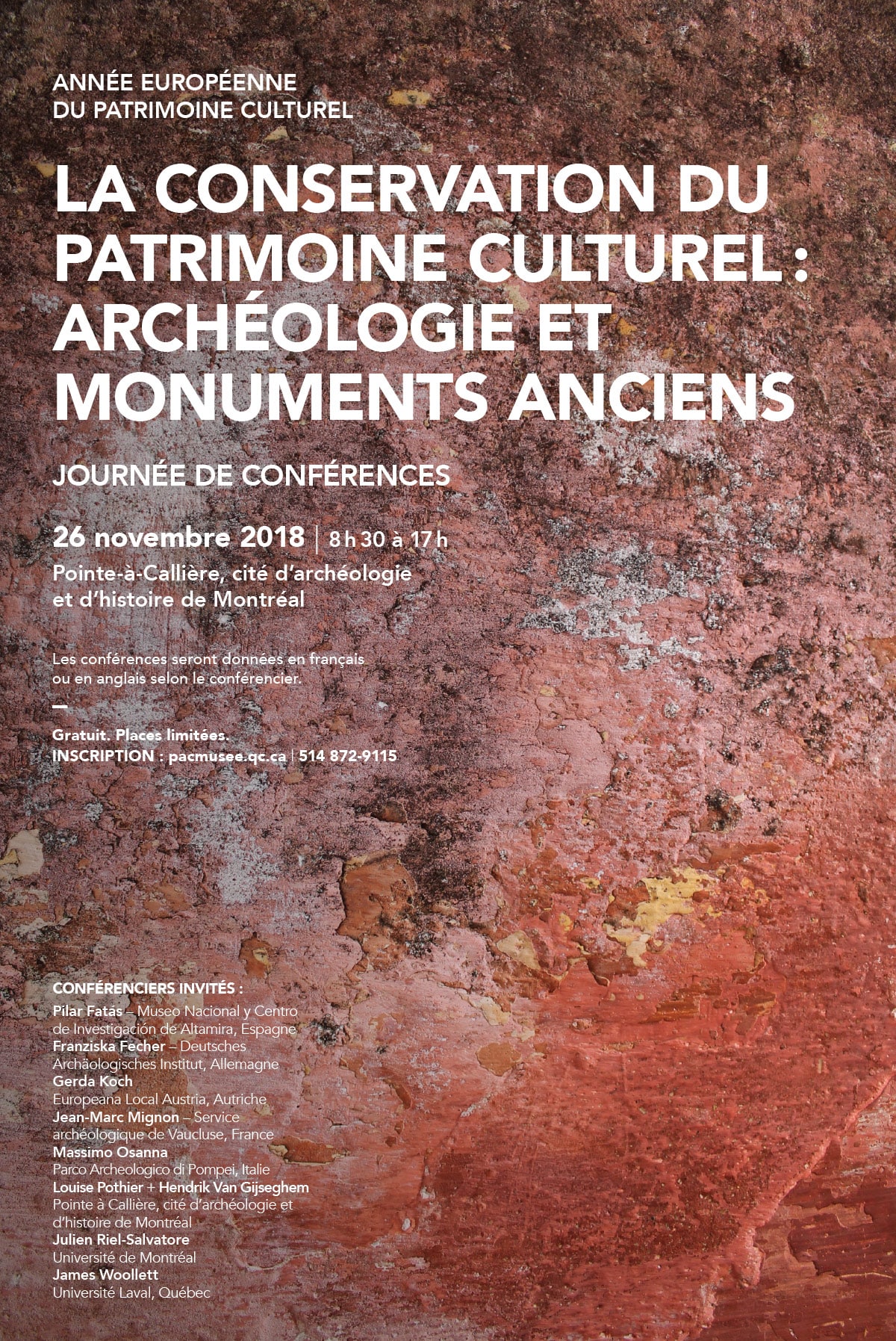 The lectures will be given in French or English depending on the speaker. Opening reception at 8.30 am; conferences begin at 9 am.

A project of the European Union National Institutes of Culture (EUNIC - Montreal cluster: Goethe-Institut, Istituto Italiano di Cultura, Consulate General of France, Consulate General of Spain, Austrian Cultural Forum in Ottawa, Instituto camões), in partnership with Pointe-à-Callière, city of archeology and history of Montreal, as part of the European Heritage Year. Image by Pedro Saura from the photograph collection of the National Museum & Research Center of Altamira

There is no other event programmed in Heritage.