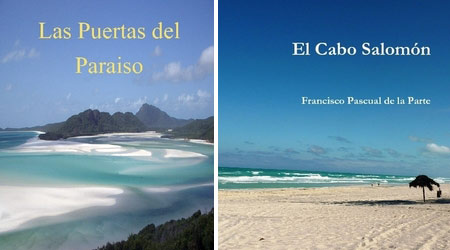 Las Puertas del Paraiso
In 1845, a Galician sailor sails to the island of Fernando Poo, in search of the grave of his grandfather, who died there in 1778. In the company of the woman whom he falls in love with, he learns to live there as a native more and eventually finds what he was looking for. As he reconstructs the life of his ancestor on the island, he is stunned by what he discovers about him…

El Cabo Salomón
Scenes of singular tenderness, romances truncated by denunciation and suspicion, heroic behavior and shameful acts of cowardice, conversations with terrorists, endearing homes destroyed by a war, unexpectedly comic scenes… — All these pass before the astonished eyes of the reader, a privileged witness to the historical background of a fascinating era marked by neocolonialism, terrorism, the fall of Communist regimes, the reunification of Germany, the Balkan wars and the emergence of the new Russia and the Central Asian republics.