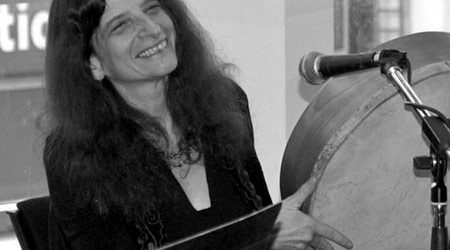 The concert will take place as part of the Canadian Association of Hispanists Congress in Waterloo, from May 26-29, 2012.

Dr. Judith R. Cohen is a performer and ethnomusicologist specializing in Judeo-Spanish ("Ladino") Sephardic songs, as well as in medieval and traditional music, including Balkan, Portuguese, Yiddish, and French Canadian, pan-European balladry,and songs from Crypto-Jewish regions of the Portuguese-Spanish border.

Her daughter, Tamar Ilana Cohen Adams (born in 1986) often performs with her. Judith's performance repertoire and lectures draw on her village field work in several Mediterranean countries and in urban immigrant communities, and on her academic research, presented in a dynamic, accessible style adaptable to audiences from sophisticated cognoscenti to school children. She accompanies her traditional-style singing on bowed vielle, 'ud, dulcimer and traditional percussion instruments, and is an accomplished player of recorders and pipe-and-tabor.

Tamar Ilana is an accomplished traditional singer, and adds percussion, drawing on her years of flamenco dance training and her travels and fieldwork with Judith.

Organized by the Canadian Association of Hispanists, Wilfrid Laurier University's Faculty of Arts and University of Waterloo's Spanish and Latin American Studies